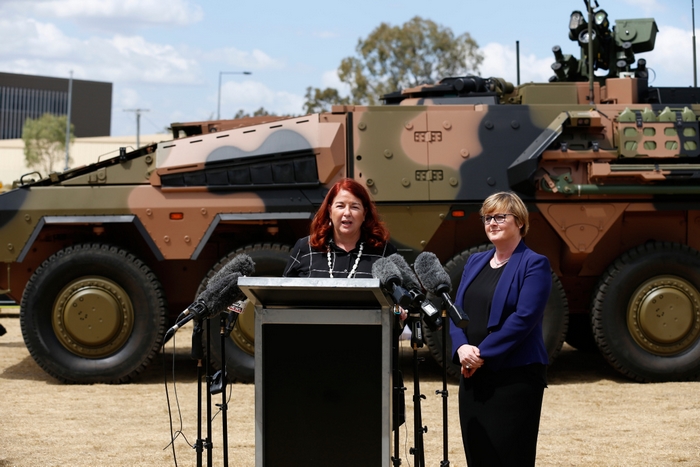 The first of the 211 new Combat Reconnaissance Vehicles (CRV) for the Australian Defence Force has been handed over during a ceremony held at Enoggera (Gallipoli) Barracks in Enoggera on 24 September 2019.

The new fleet of Boxer 8×8 CRVs will be acquired under the $5-billion LAND 400 Phase 2 Mounted Combat Reconnaissance Capability program and will be delivered by Rheinmetall Defence Australia.

Whilst formally accepting the new CRV, Minister for Defence, Senator the Hon Linda Reynolds CSC said that the new armoured vehicles will provide world-class capability for the Australian Army with their high levels of protection, firepower, and mobility.

“These new vehicles are part of the Liberal National Government’s $200 billion investment in our defence capability to ensure the Australian Defence Force is equipped to succeed in our challenging strategic environment,” Minister Reynolds said.

“They will be able to undertake a range of missions from regional stability and peacekeeping through to high-threat operations, and will provide improved safety to Australian soldiers on deployment and on exercises around the world.”

“This project presents an exciting opportunity for Australian industry to play a vital role in delivering leading-edge capability and technology to Australia’s Army,” Minister for Defence Industry the Hon Melissa Price said.

The LAND 400 program aims to provide the Australian Army with a fleet of modern armoured fighting vehicles that will remain a potent weapon system over the next 30 years. The new vehicles will be equipped with modern and highly capable sensors and communications suites.

The 211 Boxer 8×8 Combat Reconnaissance Vehicles Drive Modules and 223 Mission Modules will be acquired under the LAND 400 Phase 2 to replace the Australian Light Armoured Vehicle (ASLAV) fleet.

The first 25 vehicles are to be manufactured in Germany whilst the remaining vehicles will be assembled at Rheinmetall’s Military Vehicle Centre of Excellence facility in Redbank.